SHOT 2/3/18 4:38:08 PM - A capilla dedicated to Santa Muerte (Nuestra Señora de la Santa Muerte) near El Guamuchil, Mexico. Santa Muerte (Holy Death), is a female deity (or folk saint depending on school of thought) in Mexican folk religion, particularly Folk Catholicism, venerated primarily in Mexico and the Southwestern United States. A personification of death, she is associated with healing, protection, and safe delivery to the afterlife by her devotees. Despite condemnation by the Catholic Church her devotees have grown in numbers lately and many followers of Santa Muerte live on the margins of the law or outside it entirely. In the Mexican and U.S. press, the Santa Muerte cult is often associated with violence, criminality, and the illegal drug trade. Altars of Santa Muerte temples generally contain one or multiple images of the Lady, generally surrounded by any or all of the following: cigarettes, flowers, fruit, incense, water, alcoholic beverages, coins, candies and candles. Capillas are common along the roads and highways of Mexico which is heavily Catholic and are often dedicated to certain patron saints or to the memory of a loved one that has passed away. Often times they contain prayer candles, pictures, personal artifacts or notes. (Photo by Marc Piscotty / © 2018) 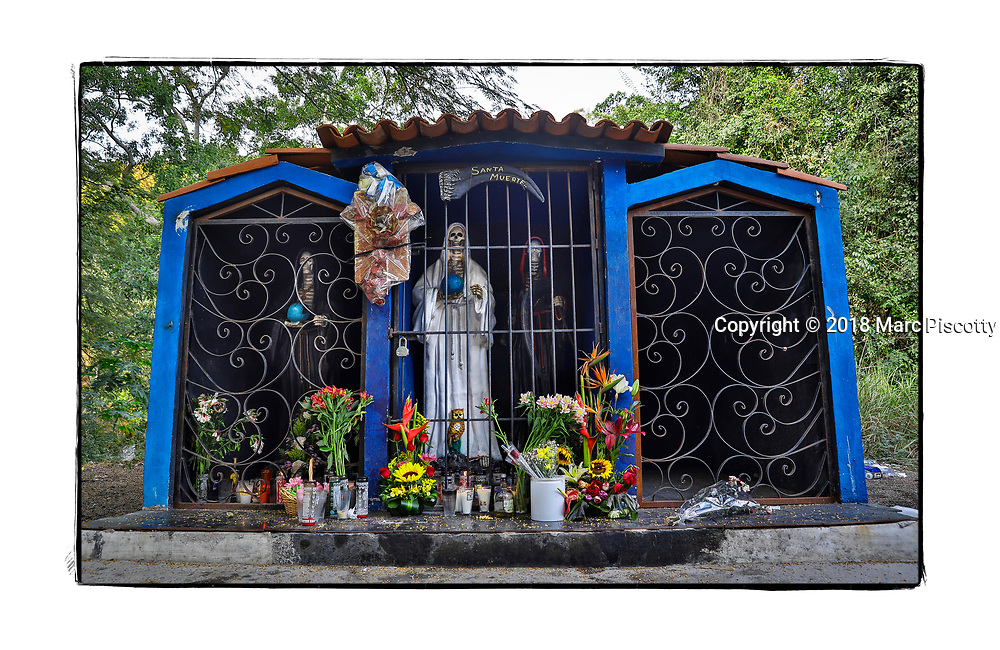