SHOT 10/23/2007 - Lavender bunches for sale at the Ferry Building Farmer's Market in San Francisco, Ca. In 2004, the building reopened as an upscale gourmet marketplace, office building, and re-dedicated ferry terminal. The restoration project spanned several years, with an emphasis on recreating the building's 1898 ambience. San Francisco's largest farmers market is held there on Tuesday and Saturdays. The City and County of San Francisco is the fourth most populous city in California and the fourteenth-most populous in the United States. San Francisco is a popular international tourist destination renowned for its steep rolling hills, an eclectic mix of Victorian and modern architecture, its large LGBT (lesbian, gay, bisexual, and transgender) population, and its chilly summer fog and mild winters. The Lavenders Lavandula are a genus of about 25-30 species of flowering plants in the mint family, Lamiaceae, native from the Mediterranean region south to tropical Africa and to the southeast regions of India. Lavenders are widely grown in gardens. Flower spikes are used for dried flower arrangements. The fragrant, pale purple flowers and flower buds are used in potpourris. Dried and sealed in pouches, they are placed among stored items of clothing to give a fresh fragrance and as a deterrent to moths. The plant is also grown commercially for extraction of lavender oil from the flowers. This oil is used as an antiseptic and for aromatherapy. French chefs in and around Provence, France have been incorporating this herb into their cuisine for many centuries. Lavender lends a floral, slightly sweet and elegant flavour to most dishes..(Photo by Marc Piscotty © 2007) 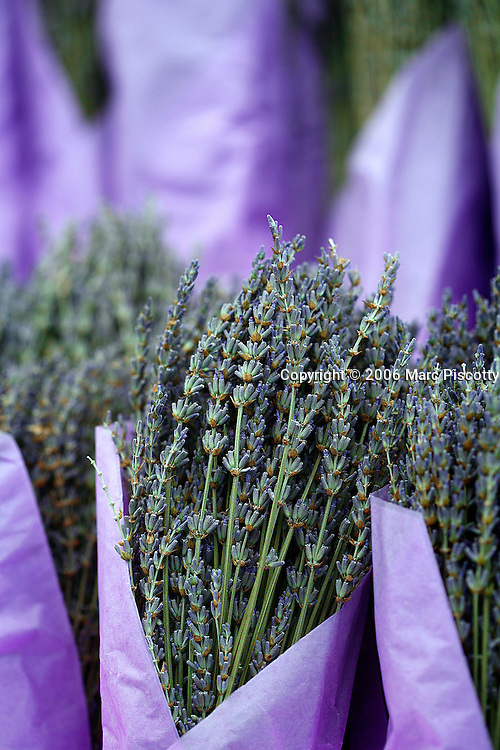