Great Sand Dunes National Park and Preserve, located near Alamosa, is the state's newest national park and features stunning sand dunes that rise more than 700 feet above the floor of the San Luis Valley. Last year the National Park Service completed the conversion of Great Sand Dunes from a national monument to a national park. The park now encompasses some 150,000 acres and the dunes were formed by blowing winds that have carried sand across the San Luis Valley and deposited them at the base of the Sangre de Cristo Mountains for thousands of years. Great Sand Dunes National Park and Preserve is a United States National Park located in Alamosa County and Saguache County, Colorado, United States. Originally designated Great Sand Dunes National Monument, Great Sand Dunes National Park and Preserve was created by an act of the United States Congress on September 13, 2004. The park contains approximately 85,000 acres. The dunes were formed from sand deposits of the Rio Grande and its tributaries, flowing through the San Luis Valley. Over the ages, westerly winds picked up sand particles from the river flood plain. As the wind lost power before crossing the Sangre de Cristo Range, the sand was deposited on the east edge of the valley. This process continues, and the dunes are slowly growing. The wind changes the shape of the dunes daily. Digging a few inches into the dunes even at their peaks reveals wet sand. If the streams were to dry up, the dunes would disappear; in fact part of the motivation of turning the Monument into a National Park was the extra protection of the water, which Colorado's cities and agriculture covet..(MARC PISCOTTY/ © 2005) 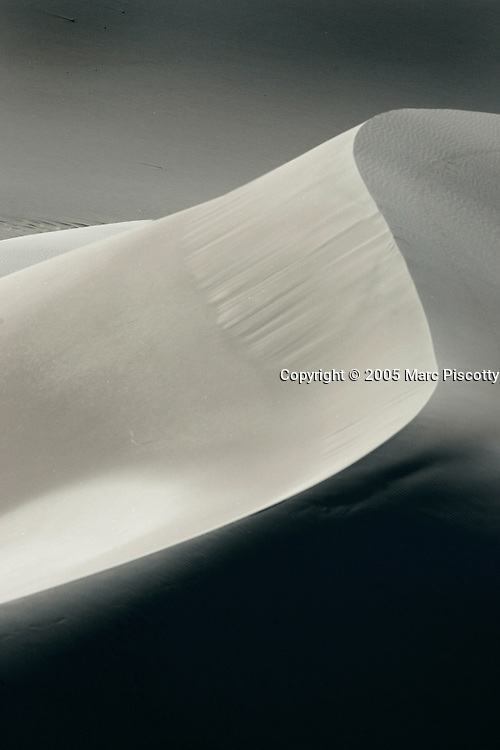